A taste of a place – Lyme Bay

One happy result of this enforced confinement to our own shores is that we have been given the perfect reason to get out and about a bit more “locally” both to discover new places, but also to reacquaint ourselves with some old favourites.

As my mum hailed from Shaftesbury in Dorset, we spent many a happy (often rainy) holiday in the family caravan in Swanage when we were kids. From here we would dot about visiting some of our favourite spots; the golden beaches of Lyme Regis, the medieval Corfe Castle, the miniature village at Wimbourne and so on. So, after a 20+ year hiatus, we headed to Dorset….

On this trip, our first stop was Bridport/West Bay (site of BBCs whodunnit drama Broadchurch) where we had booked “the old bike shed” on Airbnb. This turned out to be a charming wooden clad shack at the end of our host’s garden. A comfy bed, a decent shower, coffee making facilities and a cute little bench out front, we were, as Brian would say “happy out”!

Not only perfectly formed, the old bike shed was equidistant between the coastal part (West Bay) and the cheerful market town of Bridport (10 minutes stroll in either direction). Therefore, pretty handy for all our holiday needs.

Bridport has much to recommend on the food and drink front (way more than we could do justice to) – a veritable haven of down to earth as well as trendy eateries and drinking holes (I mean that it the nicest sense!).

One of our first stops was “The Pursuit Of Hoppiness” ale and wine house.   A cosy and welcoming micropub on the main street where you can choose your tipple from an impressive range of local (and less local) craft beers, ciders, wines and spirits. You can choose to enjoy a pavement based drink sitting at simple tables in the sun. We, of course, sat up high, inside, as is our wont.

We ambled along to The Woodman (South Street), a handsome, independent pub with good beer and friendly staff. (A favourite amongst cider drinkers!). This place had the kind of stripped back interior that inspires confidence, and a nice laidback local vibe. Most appealing on an early summers’ afternoon…

Another recommendation on the drinks front would be a cooling glass of prosecco at the Electric Palace (South Street); history lovers, in particular will appreciate the art deco styling of this 1920s cinema (brought back to life in 2008).

Foodwise, we enjoyed a great breakfast at the charmingly named Soulshine (South Street). It was the sight of the beautiful sourdough loaves in the window beckoned me inside to investigate…Here, the friendly Soulshine crew serve up locally sourced seasonal food, as well as roasting their own (delicious) coffee. I ate the creamiest local butter I had ever tasted with my sourdough toast and Brian enthused about the kimchi with beautifully frilly fried eggs and toast. This one is definitely on the list for a lunch or dinner visit next time we are in town.

Later, I called to Bellas; a lovely, family run takeaway to get some healthy salads for lunch. I did achieve this, but found it impossible to resist the iconic Dorset Apple Cake in the window – and I am not a person whose head is normally turned by cake!

It is hard to put your finger on what differentiates a Dorset apple cake, but it is taken seriously here – officially the county’s “national” dish….What I do know is that this hefty slab of homemade cakey loveliness evoked some very happy childhood memories. Take a look at Felicity Cloake’s recipe in The Guardian if you fancy having a go at your own.

The Fridge (West Street), an impressive cheese shop and deli, catered for all my essential Dorset Knobs and legendary Dorset Blue Vinny cheese requirements.  Thus, our al fresco breakfast of champions (following a hair raisingly cold swim the next morning), was complete!

(For the uninitiated, a Dorset Knob is a tasty, hard savoury biscuit, originally made from left over bits of dough which has been baked 3 times, providing a unique flavour and texture – only produced in Bridport, by the family owned, Moores Biscuits. Best enjoyed with cheese – IMO).

Heading in the opposite direction from our Airbnb, to the beautiful West Bay and its shingle beach, fronted by an imposing golden cliff, we enjoyed that most seaside of treats; a pint of prawns at The West Bay Hotel. Perfect!

It was a relief to see that West Bay is still much as I remembered it; appearing largely untroubled by its recent TV fame with many parts remaining happily ungentrified. A lovely spot for family holidays with affordable dining options such as the colourful wooden huts that front the boating lake, serving up top quality fresh take away to the assembled holiday makers, hungry after their beach based antics.

We ate some very fine fish and chips from the Ships Galley, sat on the wooden bench, drinking a can of pop – again reminiscent of family holidays gone by…

Similarly simple and fuss free was the outdoor venue, Catch of The Bay -somewhere between a surf shack and a beer garden. One evening, we tucked into a perfectly pitched meal of super fresh, grilled mackerel and pan fried scallops, both served with chips and local cider. Seated up high for a good view across the harbour – the stuff of our holiday dreams (whatever country we might find ourselves in).

Speaking of the things of dreams, also well worth a visit is the impressive Wall of Cider at the “Shop around the corner” (George Street); a fascinating little microbar and shop run by a local couple. If you like things down to earth and a little quirky (like we do!) then this is a great place to wile away an hour or two, over some seriously good local cider and a chat with the friendly owners and locals alike.

After a couple of nights in the bike shed, we decamped just across the Dorset/Devon border to picturesque Beer; a tiny, unspoilt village surrounded by white cliffs, with a shingle beach. The beach is still home to fishing boats which land the daily catch, that is sold just up the way at the Beer Fisheries shack.

When I’m visiting the UK coast, it is compulsory to have at least one crab sandwich (if crab isn’t available, prawn will do – but only just). Therefore, on pitching up, our first stop was the aptly named Barrel O’ Beer for a locally caught crab sarnie and a beer (what else?). Now, I fancy myself as a bit of a connoisseur of the crab sandwich, and I would argue that this one was one of the freshest and best I’ve tasted, literally metres from where the crab was landed.

In Beer, we stayed at another old favourite, The Dolphin Hotel (Fore Street); a family run pub/hotel with a cosy, homely feel. Upstairs, the hotel was exactly as we remembered, with simple and spacious rooms. Things downstairs had changed a bit in terms of layout and decor, but the old character had been preserved, including the fairground mirrors and near psychedelic tiles, which can be challenging after a night out.

On one of the evenings, we sat in the nautically coloured terraced garden, with an array of vintage advertising signs on the sparklingly whitewashed walls.  Happily, I opted for a very fine local skate wing, simply pan fried and accompanied with new potatoes and minted peas – just perfect in it’s simplicity.

After dinner we nipped over to the ambient little gem that was cocktail and wine bar, Osborne’s for a nightcap. A simple G&T and some good moorish olives, were just the tickets. We chatted with the friendly owners of this newly acquired (& perfectly formed) bar and wished them well – though I have no doubt they will make a great success of this well-appointed business.

The next morning, buoyed by some fab locally smoked kippers for breakfast, we were set up nicely for a hop back across the border to the “Pearl of Dorset”, that is Lyme Regis.

Lyme is a heart winningly pretty town with an array of beautiful shops and eateries, grand Georgian buildings and golden beaches. A walk along the harbour wall aka The Cobb, (site of The French Lieutenant’s Woman), is a must.

We dipped in and out of some lovely shops. Worth particular mention was Ammonite Fine Foods (Broad Street). A cheerful little shop specialising in West Country fare, such as that poky Dorset Blue Vinny cheese I mentioned earlier, chutneys, local artisan chocolate, an impressive range of gin and some seriously good wine from Lyme Bay Winery, located in Devon’s Axe Valley (I can feel a taste adventure coming on there….)

After a bit of a hike up the hill to the parking on what was a surprisingly hot day, there was only one thing for it, a slice of watermelon at the Holmbush Café (Holmbush car park).

We had time to fit in just one more of our old favourites; a lunchtime trip to the gorgeous 14thCentury Masons Arms in the picturesque village of Branscombe (if you’re not in a hurry like we were, you can easily walk there over the head from Beer).

Again, we were happy to note that the pub had retained all of its (considerable) character including its unusual thatched parasols, beamed ceilings etc.  The staff were super friendly, which is always a major factor, in my book.  Lunchwise, we opted for a small, but perfectly formed, ale battered fish and chip lunch. Homemade tartare sauce and delicious crushed minted peas really elevated this simple dish.

This brought to an end our much overdue whirlwind tour of beautiful, friendly Lyme Bay. So unspoilt, a loveable chunk of nostalgia (also not as far as we remembered!), there is no chance of us leaving it so long before we visit this perfect corner of the UK once more….. 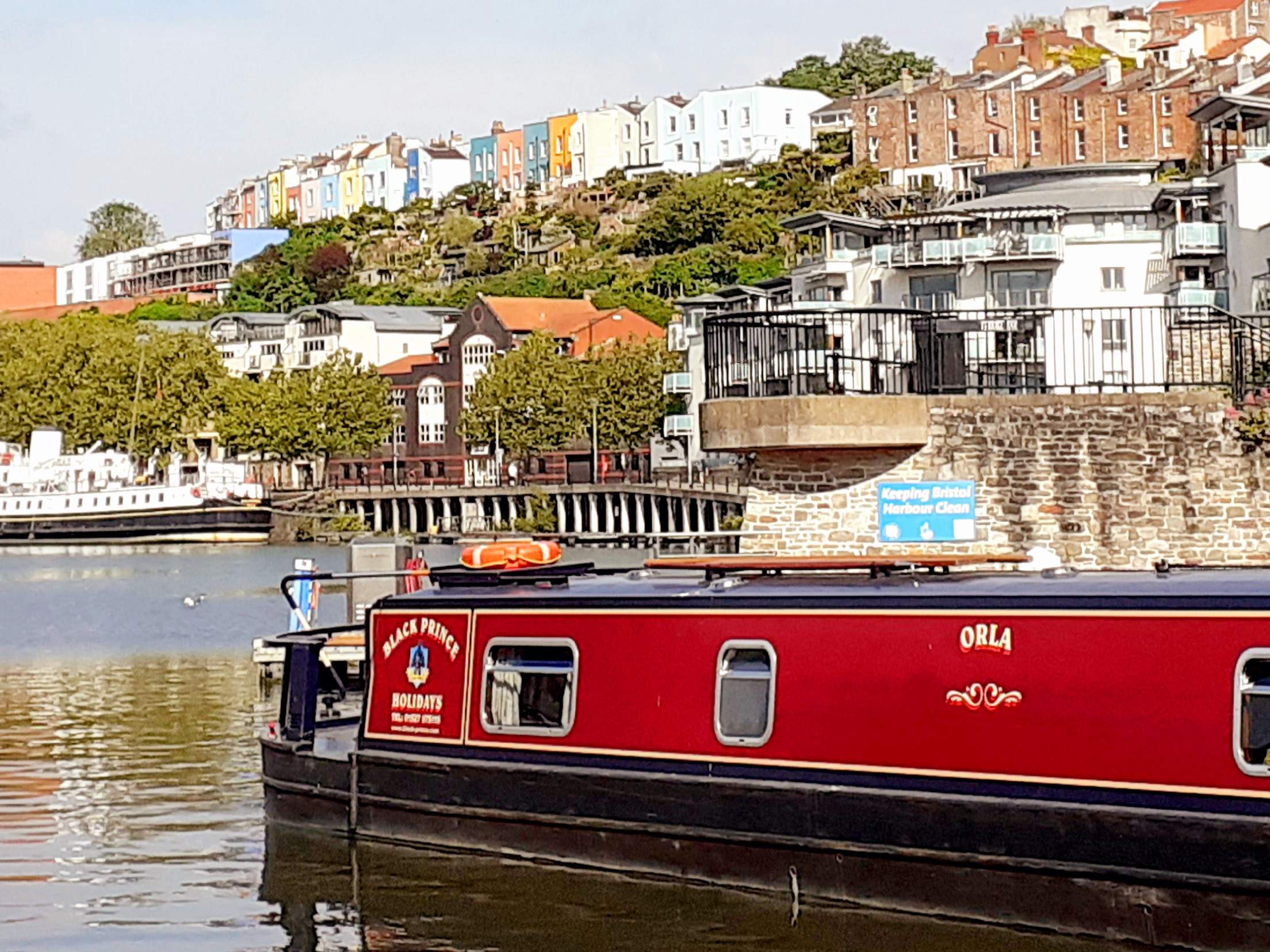 A taste of a place – Bristol

A taste of a place – Southwold 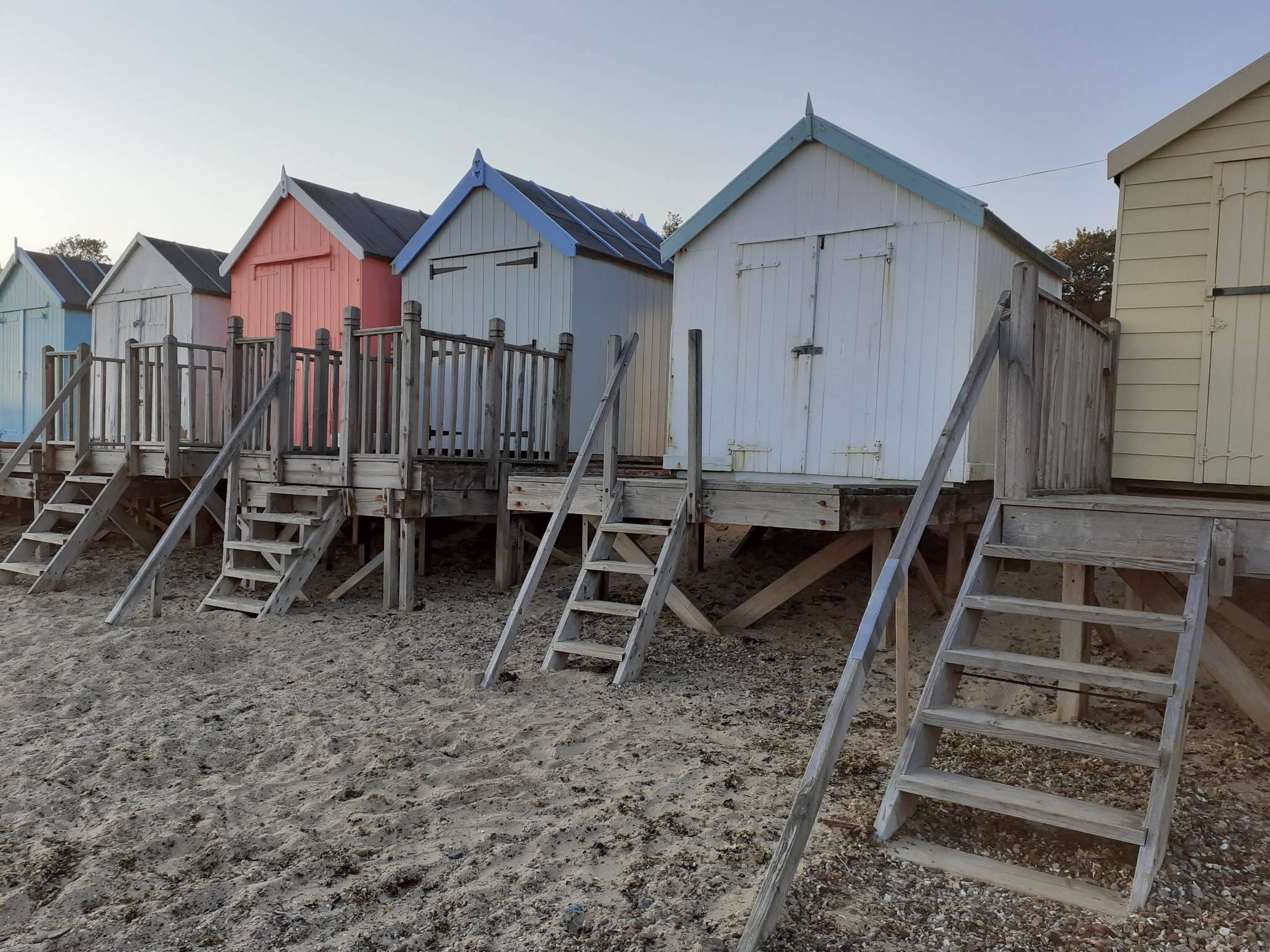 A taste of a place – Felixstowe